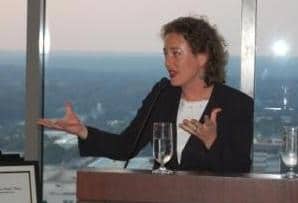 Rep. Jean Farmer-Butterfied received the Representative of the Year Award from NCLCV President, Nina Szlosberg. Rep. Farmer-Butterfield’s passionate advocacy has made her a respected voice in the State House. In 2007, she impressed the environmental community by proposing an amendment to the renewable energy bill (S3) which, if adopted, would have given preference to hog-to energy systems that use cleaner technology.

Representative Charles Thomas received the Freshman of the Year Award in 2008 because he quickly made a mark as a strong voice for the environment in his first term. Thomas sponsored H2720, which would require that the State purchase only passenger vehicles in the top 15% of fuel efficiency for cars in their class.

President Pro Tempore Marc Basnight was awarded the Defender of the Environment Award. Senator Basnight has been a consistent defender of North Carolina’s coast: he has championed the restoration of shellfish habitat, advocated successfully for protection of our endangered waterways, and was the principle legislative force behind the creation of the Clean Water Management Trust Fund. Staff Matty Lazo-Chadderton received the award in his honor.

Senator Charlie Albertson received the Senator of the Year Award for his years of service as the long-time chair of the Environment, Agriculture, and Natural Resources Committee. He ran the committee with an even hand and a keen wit. His pragmatic, yet progressive, perspective on energy matters and climate change, his strong commitment to funding our natural resource trust funds, and his strong role on improving our solid waste management make him a standout amongst our legislators.