2007 was our first annual Green Tie Awards Dinner, and it was a very special occasion.

2007 marked the 1st Annual Green Tie Awards, honoring individuals who have made particularly great contributions to the protecting North Carolina’s environment. This year’s event was a great success from any standard, and was attended by business leaders, philanthropists, lobbyists, state officials and veteran activists from across the state, as well as 20 legislators of the N.C. General Assembly. 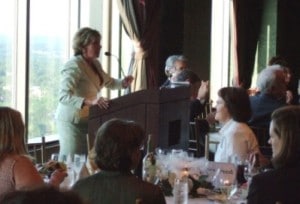 Notable attendees included long-time environmental activists and philanthropists Alice and Fred Stanback and Mrs. Jane Sharp MacRae, founding member of NCLCV and the “Godmother of the North Carolina Environmental movement.” It was Jane’s 90th birthday, and we named the “Jane Sharp Lifetime Environmental Champion Award” in honor of her inestimable contribution to the environmental community of North Carolina. This award recognizes legislators who, not only support sound environmental legislation, but who prioritize their commitment to protecting North Carolina’s natural resources, the health of our communities, and our future…often in the face of well-resourced opposition and political pressure. 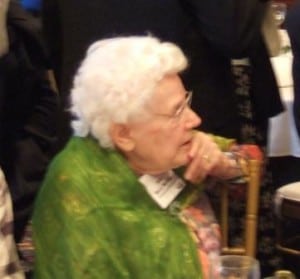 President of NCLCV’s Board of Directors, Nina Szlosberg, and Franklin Freeman, who served as Governor Easley’s advisor on Legislative Affairs, led the ceremonies. Getting the attendees laughing with a down-home joke about a country Minister and a taxi driver, Mr. Freeman noted that, ‘in politics as well as in Heaven, it was results that counted most, and it was on that basis the Awardees had been chosen.’ 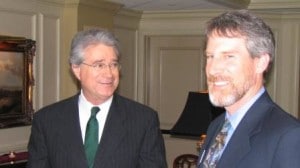 Speaker of the N.C. House Joe Hackney received the inaugural Jane Sharp Lifetime Environmental Champion Award in honor of his longtime advocacy of environmental issues in N.C. General Assembly. Speaker Hackney was, himself, a member of NCLCV during the early years of the group when it held meetings in Mrs. Sharp’s basement. He has served in the NC State House since 1980, and was elected Speaker in 2007, and has been consistent champion for environmental issues. He was a leader on the state’s phosphate ban in the mid 1980’s and has sponsored innumerable bills protecting our air, water, and land resources. He served on the House Environment Committee for many years and co-chaired the Legislative Commission on Global Climate Change.

Rep. Pricey Harrison was awarded the Representative of the Year. She has been a long-time environmental advocate, even before getting elected to the State House in 2004. Harrison defeated an eight-term incumbent to win that seat, representing her hometown of Greensboro and Guilford County. She is a leader on a wide range of environmental issues as a state legislator, including polluted stormwater run-off, renewable energy, climate change, low-impact development, and alternative fuels, to name a few. She has also distinguished herself by her deft handling of environmental budget matters as a member of NER, the Appropriations sub-committee that handles environmental matters. Her deep understanding of the budget process and hands-on approach to budget matters have made a huge difference to environmental funding.

Senator Janet Cowell, another long-time environmental advocate, received the Senator of the Year award. Senator Cowell served for four years as an at-large member of the Raleigh City Council before being elected to the State Senate in 2004. Sen. Cowell quickly distinguished herself as a knowledgeable and hard-working member with special expertise in environmental matters. She sponsored legislation to recycle computers and electronic equipment, make state government buildings energy-efficient, increase penalties for air pollution, and study North Carolina’s organic produce industry. Janet Cowell won her bid for State Treasurer in 2008.

Representative Carolyn Justice was recognized as Defender of the Environment for her persistent focus on resolving the negative impacts of swine farming in eastern North Carolina –an environmental issue that has remained unresolved for over 10 years. Justice sponsored a comprehensive swine bill that would have substantially reduced or eliminated pollution to the atmosphere, water, and soil caused by swine farms, along with creating a task force to better police the hog farming industry in the state. Hog farming is big business in Eastern North Carolina, and Justice’s willingness to take the industry on demonstrates her dedication to doing what’s right—regardless of the potential political ramifications. In thanking the group, Rep. Justice joked, “A conservative Republican like me isn’t even supposed to be at an event like this!” But she went on to reiterate her commitment to cleaning up the swine industry because “it is the right thing to do.”

The ceremonies finished with a particularly heart-warming touch, as Jane Sharp was presented with a sparkler-topped cake and a round of “Happy Birthday to You” in honor of her 90th birthday. Ms. Sharp, in attendance with her family, was clearly touched by the tribute and, in a brief speech, thanked NCLCV and the attendees.