NCLCV’s fourth annual Green Tie Awards Dinner on June 29th, 2010 honored a number of elected officials who understand that a sound environment and a sound economy go hand in hand. These decision-makers work to protect North Carolina’s remarkable natural resources and our quality of life.

Lt. Governor Walter Dalton and Secretary of Transportation Gene Conti were our featured speakers. Both highlighted how North Carolina is becoming a leader in moving or state into a new green economy that protects our resources, our economy, and our communities. 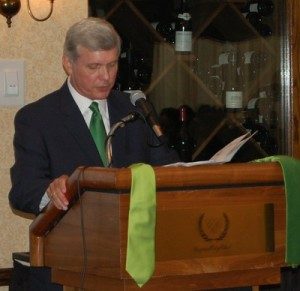 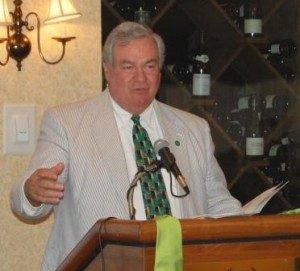 Nina Szlosberg Landis, president of NCLCV, set the stage for the awards: “As we mark the fourth annual [NCLCV] Green Tie Awards, our country is facing what is perhaps the most devastating environmental crisis of our time. Tonight, anywhere from 30,000 to 50,000 barrels of oil are gushing from a hole in the bottom of the waters of the gulf coast, fouling the water, coating marine life with a suffocating slime, choking the fragile marshlands that serve as the coast’s natural filtration system, and killing the estuaries that produce such bountiful food – and the businesses that depend on them.

“If ever there was an example of why elections matter… [the oil spill] is the poster child. If ever we needed leaders who understand that short term thinking can lead to long term problems, it is now…And we are here tonight to recognize so many leaders who are doing the right thing for North Carolina,” said Szlosberg Landis.

Representative Kelly Alexander of Mecklenburg County has a bright legislative future ahead of him. It may be a bit presumptuous to label someone as accomplished as Representative Kelly Alexander a “rising” star. He already has won the Harvey E. Beech Outstanding Alumni Award from the University of North Carolina, manages a small business, and has participated on boards too numerous to list. But Representative Alexander is a rising star for the environment. He scored a 100% environmental voting record in his first full year in the General Assembly, spearheaded efforts to expand the state’s electronic recycling law to include small nonprofits, and is the primary or cosponsor on a wide array of important environmental legislation.

Representative Tricia Cotham of Mecklenburg County is the youngest woman ever to serve in the General Assembly, and, as a rising star, her future is even brighter than her impressive past. Thankfully, part of that promising future is leading a new generation of environmental protectors. A consistent supporter of the environment, her leadership in cosponsoring the NC Saves legislation to weatherize low- and moderate-income homes shows that Rep. Cotham is rising to meet the challenges of our great state. Not to understate things, but she gets it– and we know we can always count on her support.

As a rising star, Senator Josh Stein of Wake County, has already started to deliver on his strong commitment to the environment and the natural beauty of North Carolina. Acutely aware of the challenge that climate change poses to our planet, Senator Stein understands that the future growth of Wake County and the Triangle must be handled in a sustainable fashion. To that end, he has become a leader in promoting green energy. He played an essential role in expanding energy savings performance contracts and extending the energy tax credit until 2016. While taking a large role in these issues, Senator Stein still found time to champion and see signed into law major improvements for the Upper Neuse River water basin, and a ban on plastic bags, as well.

Senator Don Vaughan of Guilford County has wasted no time in filling the large shoes of now U.S. Senator Kay Hagan. Bringing his legal mind to bear on the problems of North Carolina, Senator Vaughan has immediately demonstrated his support for the environment with a 90% pro-environment voting record in his first term in office. His support spans from our treasured mountains to our beautiful coast, as he cosponsored the successful effort to make Grandfather Mountain a state park and has established himself as a courageous defender of North Carolina’s wise coastal stewardship. We look forward to many good things from this rising star down the road.

Representative Becky Carney of Mecklenburg County understands that protecting the environment and protecting North Carolina’s quality of life go hand-in-hand. She also demonstrated that fighting for legislation takes not only commitment but personal courage. Representative Carney battled through health problems to pass essential legislation for the funding of public transportation, legislation that protects the environment and invests in a more sustainable transportation system for North Carolina. Her efforts from last year truly stand out, and offer inspiration to all those who work to advance a better North Carolina. NCLCV was proud to name her Representative of the Year, knowing she is a champion every year.

Senator Bob Atwater of Chatham County had a 100% voting record last year, reflecting his commitment to the environment. Senator Atwater diligently ensures that North Carolina gets cleaner and more beautiful every year. To this end, he constantly promotes energy conservation and smart water management as Chair of the Agriculture, Environment, and Natural Resources Committee. In this role, he leads with a fair hand and deliberate approach, allowing every voice to be heard on the important issues before the committee.

As a Major in the Army Reserve, Representative Grier Martin of Wake County is a fitting defender of the environment. His remarkable pragmatism and long-time commitment to advancing the cause of the environment in North Carolina, make him a great champion. His leadership can be seen on advocacy efforts ranging from engaging veterans on the national security threats posed by foreign energy dependence and climate change, canoeing the Neuse River to highlight the need for river basin protections, to sponsoring legislation to make our state’s cars cleaners.

The Catalyst Award is a special award to honor someone who has taken exceptional action to create change and/or to bring attention to an important environmental issue. Climate change is one of the most important challenges of our times, and one that that demands urgent action, not just at the state level, but on the national and international level as well. Congressman G.K. Butterfield (NC-1) has proven a true catalyst for remaking America’s energy policy and leading our nation towards a clean energy future. As Vice Chairman of the House Energy and Commerce Committee, Congressman Butterfield crafted key sections of the American Clean Energy and Security Act that will protect North Carolina families from rising energy costs. It is unlikely that this landmark legislation would have passed out of the U.S. House last June without his exemplary leadership.

John has represented communities across North Carolina in addressing local, state, and national threats—ranging from nuclear and coal plants, to landfills, hog waste to hazardous waste, wastewater discharges and land conversation—and everything in between. He’s taken a stand before the Utilities Commission, the Environmental Management Commission, the General Assembly, the Coastal Resources Commission, and other state Boards and Commissions; he’s brought cases and issues to multiple levels of the judicial system, he’s stood before local councils in counties across the state. He’s submitted comments to most every Division within the Department of Environment and Natural Resources, the Nuclear Regulatory Commission, EPA and so many others—He’s an expert on the issues and on how decisions are made. He has given a voice to people who care about their communities.

John has been an integral part of NCLCV since 1980 as staff, board member, president, and legal counsel. He has served on the Board, served as legal counsel, staffed, or helped establish numerous environmental groups across NC. In his commitment to working with environmental organizations, he has shaped the way environmental activism is done in NC.

John’s heart is in the people of our communities, and he’s a firm believer in the power those grassroots voices have—he’s a real community organizer. But he also understands that environmental decisions are ultimately made at a political level, and unfortunately influenced by money. One of John’s own measures of success is when the folks he’s been representing before county commissions and city councils run for those very offices in the next election cycle.

And he recognized, in 1999, that NCLCV had to take on the critical role of bringing the environmental voice to the political arena. So he recommended that NCLCV establish the Conservation PAC.

For these reasons, and many others, NCLCV honored John with our highest award, the Jane Sharp Lifetime Achievement Award, for his extraordinary contributions to the environmental movement, and to North Carolina.