Maria Kingery, President of NC League of Conservation Voters, set the tone for the evening’s awards: “With the national eye turned toward North Carolina, from upcoming political races, to climate change denial, to how our state handles the coal ash clean up, it is imperative that we elect leaders who will make the environment a priority in their decision-making. And this begins with the people in this room and the legislators we are honoring tonight, who stand in stark contrast to the record number –82 – who earned a score of zero on our legislative scorecard this year.” 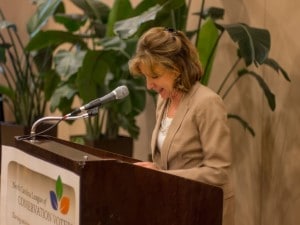 Kingery emphasized that North Carolina needs leaders who understand that we don’t have to choose between economic prosperity and our natural resources: “As a business owner and mother, I tell folks how lucky I am to live in North Carolina—we consistently receive national rankings as one of the best places to live, raise a family, and do business.”

Senator Hagan, who has earned a lifetime score of 84% on the national League of Conservation Voters Environmental Scorecard, agreed that protecting our environment is critical to growing North Carolina’s economy. Hagan received a loud round of applause for her renewable energy remark, in stark contrast to some legislative leaders: “As we address our need for renewable energy, North Carolina is well-positioned to take advantage of a 21st century energy economy. Companies and institutions across North Carolina are developing ways to use energy more efficiently, harnessing smart grid technologies, and using renewables in new and innovative ways.”

Senator Angela Bryant received the 2014 Senator of the Year award, having previously earned a Rising Star award in 2009. She advocated against a range of bad environmental legislation in the previous legislative session, from bills fast-tracking fracking to the expiration of rules regulating polluters. Her voice was most passionate in opposition to SB 328, the Solid Waste Management Reform Act of 2013. This bill would have allowed the construction of mega-landfills filled with out-of-state trash, and limited environmental and health protections. Sen. Bryant consistently fights for North Carolina’s citizens and communities.

House Minority Leader Larry Hall received the Representative of the Year award. Rep. Hall earned a 100% on NCLCV’s 2013 scorecard, putting his lifetime score at 97%. He advocates strongly for the environment, but as House Minority Leader, he is also able to work behind the scenes to provide sound defense on environmental issues and call other voices to speak with him. Rep. Hall has consistently demanded a thorough, thoughtful, and slow approach when considering opening North Carolinato fracking. Last session, Rep. Hall also helped lead the fights against repealing the Renewable Energy Portfolio Standard (REPS) and the Jordan Lake rules.

NCLCV also took the opportunity to thank several legislators who will not be returning to the General Assembly for their service on behalf of the environment with “The Joe” award, named for the environmental legacy of former Speaker Joe Hackney.

Senator Ellie Kinnaird, a 2009 Green Tie recipient, was a tireless advocate on an extensive range of environmental issues throughout her 16 years of legislative service. She consistently engaged with environmental advocates to ensure they had a voice throughout the legislative process.

Representative Joe Tolson spent nine terms in the House supporting environmental issues. He was a leader on clean energy throughout his career and a long-serving member of the Energy Policy Council.

Senator Dan Clodfelter was a dedicated advocate for the environment for 16 years in the legislature and will carry this forward as Mayor of Charlotte. His analysis of environmental regulations, and his ability to reveal the unintended consequences of legislation, made him an effective leader on conservation issues.

NCLCV also honored the legacy of Senator Martin Nesbitt (1946-2014) who was a powerful and memorable voice for North Carolinians for more than three decades, fighting for the rights of everyday citizens on issues ranging from public health to clean air. He led the charge on the Clean Smokestacks Bill which passed in 2002. This historic legislation forced power plants to clean up their toxic emissions and set the stage for North Carolina’s Attorney General to successfully hold out-state-polluters accountable.