The 2015 Green Tie Awards were held on Wednesday, May 27 at the Nature Research Center after a broken pipe forced a venue shift from the original NC Museum of Natural Science.

Attorney General Roy Cooper served as the event’s keynote speaker. A recipient of NCLCV’s Catalyst Award at the 2009 Green Tie Awards dinner, Attorney General Cooper touched on how far North Carolina has come in protecting the places and people who call the state home – and noted how far we still have to go in promoting pro-conservation policies.

“Our state had made such great strides in cleaning up our air and water by holding polluters accountable, whether it was large entities like Tennessee Valley Authority (TVA) or hog operators in the eastern part of North Carolina. Unfortunately, we’re seeing these efforts slowly chipped away by the anti-environmental agenda coming from the Governor’s office and General Assembly. These rollbacks on sound environmental policies not only put the health and safety of our natural resources in jeopardy, but they also put our communities, our workforce, and our children at risk, today and continuing in the future.” Cooper stated. 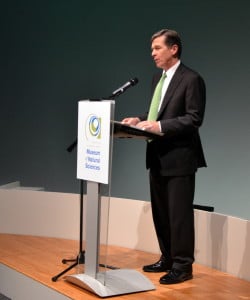 Several other award categories, including Senator of the Year and Defender of the Environment, were notably absent from this year’s Green Tie Awards. This is due in large part to the rising tide of anti-environmental legislation finding its way through the NC General Assembly.

“With the continued attacks on long-standing sound environmental policies, we at NCLCV feel that our past and current Green Tie recipients deserve to be called Defenders of the Environment,” said Dan Crawford, Director of Governmental Relations with NCLCV. “Despite the odds, our legislative allies are working tirelessly to pass bills that promote clean air and water and not allow corporate polluters to put their profits over the good people of this state.”

The 2015 legislative session has been no different for North Carolina’s environmental protections. With legislation to freeze the state’s successful Renewable Energy and Energy Efficiency Portfolio (REPS), eliminate riparian buffers designed to naturally filter local drinking water supplies, and additional budgetary cuts to the state’s environmental regulatory program, the people and natural resources of this state need far more, not fewer, champions in Raleigh.

“If we fail in protecting our environment and communities now,” noted Attorney General Cooper, ”future generations of North Carolinians will be robbed of the beauty and splendor our mountains, oceans, and open spaces have offered so many of us. It’s time to see a change in how we treat these once-in-a-lifetime resources.”

Rep. Joe Sam Queen has been a staunch advocate for NC citizens as well as our state’s air and water resource when it comes to the fast-tracking of hydraulic fracturing (“fracking”). Rep. Queen has spoken on record that the “potential permanent poisoning of our drinking water supplies from fracking is a real concern that most leaders have glossed over in their attempts to put profits in front of the health and safety of people.” He recognizes the critical importance of pushing the pause button for an activity that will have serious ramifications on the entire state. Rep. Queen passionately supported all of the attempts to amend to the Energy Modernization Act (SB786) for more health and environmental safeguards. We appreciate his continued advocacy to keep our air and water clean – not just within his district – but for all of North Carolina’s citizens.

Earning a 100% on our annual legislative Scorecard, Senator Van Duyn clearly showed her identify as an environmental champion. She cast pro-conservation votes on issues ranging from fracking to energy audits to strengthening Jordan Lake buffer rules. During the “Coal Ash Management” debate, Senator Van Duyn was one of the legislative leaders who stepped up and proposed amendments to add additional coal ash sites to the high priority cleanup list. Senator Van Duyn has proven herself to be a strong voice within the NC Senate on behalf of our natural resources.

Outside of his social media and Buzzfeed fame, Senator Jackson earned his pro-environmental stripes by attempting to keep sound environmental policies from being rolled back in the monster Regulatory Reform Act of 2014. This bill undermined critical regulations that kept our air and our drinking water supplies clean. Senator Jackson also made a formal request to have the coal ash site in his district to be added to the high priority cleanup list in the Coal Ash Management act. Using his newfound national platform, we anticipate more proactive, pro-environmental leadership from Senator Jackson in the near future.

Rep. Meyer showed his commitment to protecting North Carolina’s environment and natural resources with his 92% average in our 2014 Scorecard. He supported efforts to hold Duke Energy financially-responsible for cleaning up its coal ash sites throughout the state, and he also voted in favor in requiring companies to disclose the chemicals used in the fracking process. In his first year in office, Rep. Meyer has also been an advocate for maintaining transparency in the legislative process, recognizing the critical importance for citizens to be aware of the policy-making decisions at the General Assembly and also finding ways for those voices to be engaged in the process.

Despite entering the NC General Assembly during a highly contentious time for our state’s environment, Representative Reives has stood his ground on the fracking fight. During the House debate on the Energy Modernization Act, Rep. Reives proposed allowing local ordinances to regulate oil and gas drilling. Unfortunately, his valiant efforts were curtailed by House leadership’s move to table the amendment, thus leaving cities and counties that don’t want fracking with no authority to act. Most recently, Rep. Reives was a co-sponsor on the bill disapproving the Mining & Energy Commission’s Oil and Gas rules. He recognized that the rules did not go far enough to protect what makes this state such a wonderful place to live, to work, and to play. We look forward to seeing more of Rep. Reives leadership in the years to come.